The Top Decentralized Exchanges (DEXs) in 2021 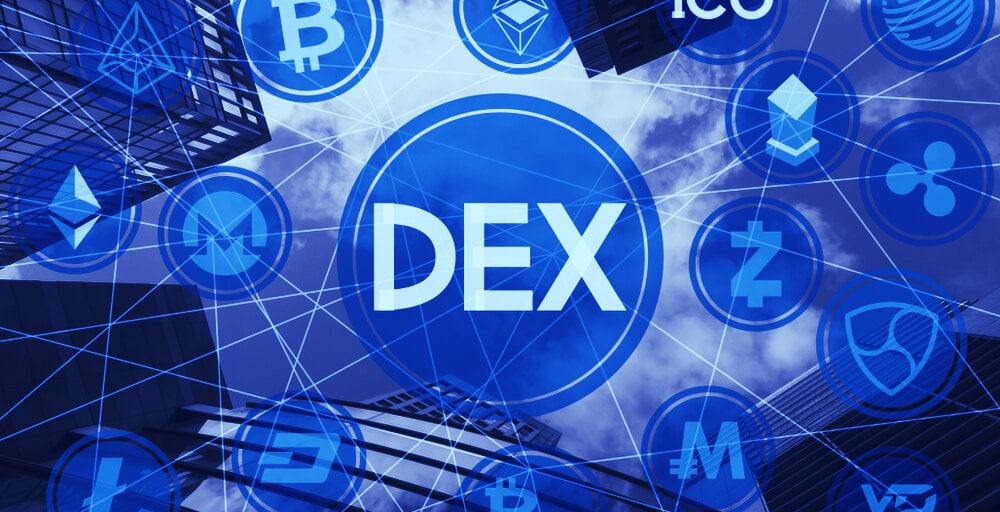 Even if you’re relatively new to crypto, you may have bought or traded Bitcoin, Ethereum and other assets on a cryptocurrency exchange. Exchanges like Binance and Coinbase are some of the most successful businesses in the crypto space; Coinbase, one of the leading exchanges, went public in a direct listing earlier this year. Binance, Coinbase, Gemini, Kraken, and others are called "centralized exchanges," since one company operates them and reaps profit from operating them.

What is a decentralized exchange?

Decentralized exchanges are one of the key building blocks of the decentralized finance (DeFi) ecosystem. A DEX is a platform where users can trade cryptocurrency directly with each other, without using a middleman. A traditional centralized exchange like Binance, for example, acts as a custodian on your behalf, with any trading taking place on Binance’s database, rather than directly on the blockchain itself.

While this is a more beginner-friendly way to trade, it has its downsides. For one thing, a centralized exchange presents a single point of failure, meaning that you could lose access to your funds if the exchange is hacked or faces server problems. Indeed, many centralized exchanges have struggled with downtime during periods of extreme volatility.

There's also the fact that many centralized exchanges require KYC authentication, which means you’ve got to provide proof of ID such as a driving license or passport (which, again, means trusting that the exchange won't be hacked, potentially exposing you to identity theft).and your identity details stolen

In contrast, DEXs let you trade directly with other users, which means that assets are under your control at all times. The negatives are that trades can be more expensive and take longer, as they’re run on the blockchain.

Check out our dedicated article on decentralized exchanges for more info, or feel free to crack on with our round-up of the best offerings below.

Uniswap is an Ethereum-based DEX that allows users to swap ERC-20 tokens. It’s one of the most popular platforms in the DeFi ecosystem, and aims to counteract one problem that’s associated with DEXs—a lack of liquidity.

It does this by allowing tokens to be swapped, which means the platform doesn’t have to rely on buyers and sellers creating liquidity (and all without charging platform fees in the process). Created in 2018 by former Siemens mechanical engineer Hayden Adams, the exchange has grown in popularity, reaching an average daily trading volume of $337 million as of June 2021.

Uniswap has a total of over 5,500 tokens available for its users to trade across its regular and Pro exchange. These include the likes of AAVE, WBTC, ETH, DAI, and USDT. Notable omissions include COMP and Binance’s BNB, the latter of which is locked by Uniswap due to the exchange’s views (see tweet).

There’s a reason $BNB is the only token locked in Uniswap.

The ERC20 standard exists to allow DAPPs to interact with tokens in a predictable way. $BNB does not follow those rules, which puts users funds at risk.

Uniswap charges a 0.3% fee for swapping tokens, with fees deposited into liquidity reserves. There are currently no protocol fees, though there is provision for a 0.05% fee to be switched on in the future.

Uniswap doesn’t have a KYC verification process, so there’s no need to mess around with supplying proof of ID—making it friendlier for beginners. Swapping tokens is as easy as connecting a wallet such as MetaMask, selecting which two assets you want to swap, and the amount you wish to trade.

Since it’s completely decentralized, a lot of projects launch directly on Uniswap, providing users with fast access to a broad range of tokens. Unfortunately, due to its decentralized nature, anyone can list fake coins too, tricking inexperienced users into swapping assets for sham tokens that are worthless.

SushiSwap is a DeFi platform running on the Ethereum blockchain that allows users to directly swap tokens with each other. Holders of the platform’s native token, SUSHI, can propose changes to how it operates, voting on proposals submitted by other users. Created in 2020 by the pseudonymous “Chef Nomi”, the platform was created by copying Uniswap’s open-source code, promising users SUSHI token rewards for locked funds.

The Man Who Saved SushiSwap

However, it wasn't all plain sailing. Chef Nomi caused outrage when $13 million worth of funds were removed from the DEX’s liquidity pool. Chef Nomi later returned the removed funds and handed control of the DEX to Sam Bankman-Fried, head of a cryptocurrencies derivative trading firm called Alameda Research. Now, SushiSwap is riding high, with 24h volume of nearly $180 million as of June 2021.

SushiSwap has around 1,400 tokens available to trade on its platform, including most of the leading DeFi tokens such as AAVE, BAL, MATIC, and rival DEX token UNI.

SushiSwap has a number of fees for its users:

Given that it’s built on Uniswap’s source code, SushiSwap is just as minimally designed and easy to use, with a simple, clean interface. Swapping tokens is simplicity itself, as is the option to add to liquidity pools.

PancakeSwap is another Uniswap clone built on the latter’s source code. Rather than operating on the Ethereum blockchain, however, PancakeSwap is powered by Binance Smart Chain, allowing users to directly trade its BEP-20 tokens and dApps.

It’s operated by a group of anonymous developers, but users control the platform by voting using the CAKE governance token. Starting off slow, the platform shot up in popularity earlier this year following the Ethereum network’s steep hike in fees. PancakeSwap's 24-hour volume currently sits at around $13 million.

As with the other DEXs on this list, PancakeSwap is clean, minimal, and easy to use, especially as it’s also built on Uniswap’s original source code. Connecting a wallet such as MetaMask, MathWallet or Binance Chain Wallet is easy, as is choosing your trading pairs is easy.

The only slightly more complicated element involves converting your ERC-20 tokens to BEP-20 using Binance Bridge—something that's achieved using the link at the bottom of the Exchange page.

1inch stands out from the pack, as it’s a DEX exchange aggregator, rather than a dedicated DEX itself. In essence, it scrapes other exchanges to automatically provide users with the cheapest prices, rerouting your trades via the exchanges that offer the best prices and overall fees for the transaction you want to make. Version two of the platform launched in November 2020, supporting 21 different DDEXs, including SushiSwap and 1inch’s own Mooniswap.

The 1inch platform supports thousands of tokens, which is no surprise given the fact that it searches over 20 different DEXs to find the best possible transactions for its users.

One of the benefits of using 1inch is that as a DEX aggregator, it doesn’t charge you exchange fees, deposit fees, or withdrawal fees. Instead, the only costs to users come from the chosen DEX used to carry out their transaction. As a handy bonus, you can use Chi Gastoken on 1inch to help minimise Gas fees on the Ethereum network.

1inch is a little more complicated to use for beginners, given that it aggregates searches for the best transactions, but it still shouldn’t cause much trouble, even for novices.

The first step is to choose which network you’d like to use, from a choice of Ethereum, Binance Smart Chain, or Polygon.

The next step is to connect your wallet of choice (such as MetaMask, MEW, Trezor, or Coinbase Wallet), which is as easy as clicking on your wallet, then connecting via your wallet’s app. After that, it’s simply a matter of searching for your trading pairs and selecting the best choice provided by 1inch.

What is 1Inch Exchange? Beginner's Guide Founded by former economist Robert Leshner in 2017, Compound is a specialized DEX that allows the tokenization of assets locked in its platform. To do this, it uses cTokens, which let users earn interest on their stored assets while also still being able to transfer, trade and use those assets in other applications.

Locking USDC in the protocol, for example, provides you with cUSDC tokens, which can earn you interest. You’re free to redeem your cUSDC tokens for regular USDC at any time, which includes any interest paid in USDC.

The Compound platform itself has no fees of any kind, although you’ll be at the mercy of Gas fees for transactions.

While slick and simple to use for experienced traders, Compound is a far cry from a regular centralized exchange like Coinbase or Binance. If your trading experience has so far been limited to more basic exchanges, then using Compound’s platform won’t be immediately obvious or intuitive. Take the time to read through guides like the one linked below, though, and you’ll soon have your head wrapped around it all.

What is Curve Finance?

Curve Finance is a DEX specifically designed for swapping between stablecoins, as well as exchanging different tokenized versions of stablecoins.

The platform acts as a decentralized liquidity aggregator, where any user can add assets to different liquidity pools, earning fees in the process. The CEO of Curve Finance is Michael Egorov, CTO of network security company NuCypher, who’s also the individual to whom most of the project’s GitHub contributions are attributed.

Curve Finance has a total of 17 Curve pools available which allows users to swap between many different stablecoins and assets. Some of the more popular stablecoins on offer include USDT, USDC, BUSD, DAI, and TUSD.

As with most DEXs, the fees for Curve Finance are determined by the DAO. The fee on all pools is 0.04%, with 50% going to liquidity providers and 50% going to DAO members holding veCRV tokens.

As with Compound, the very nature of the Curve platform will not be intuitive or easy for crypto newbies who have only dabbled in more traditional exchanges.

The fact that the platform looks like a website straight out of the early 90s (while cool, in a classic retro way), will do little to ease people in gently. Still, there are plenty of resources to get to grips with how it all works, so just take your time and understand the basics before diving in, as it were.

Stablecoins from heaven: Trading on Curve