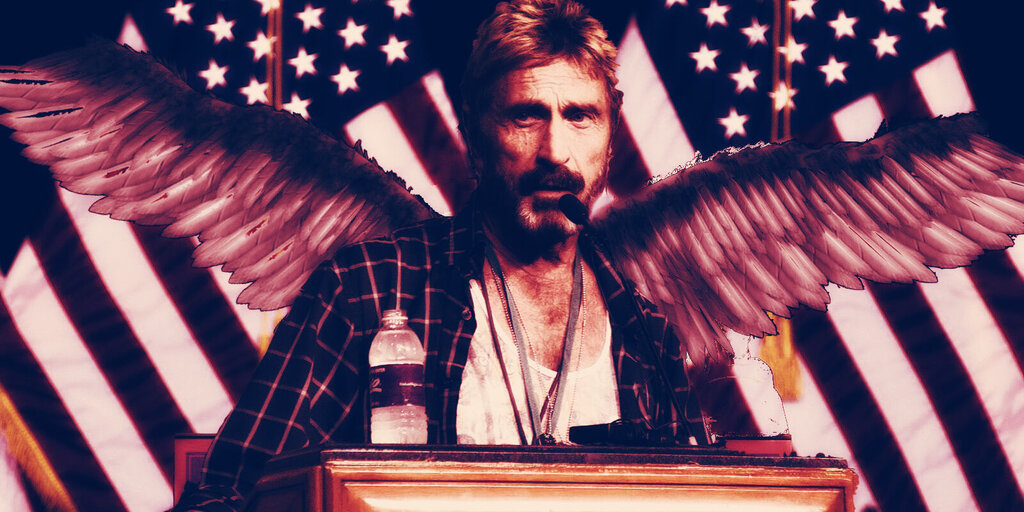 There’s an old saying in journalism that goes something like: Scoundrels are way more fun to cover than normies.

Say what you will about John McAfee—and today, when news of his apparent suicide in a Barcelona jail seeped out, people said a lot—the 75 year old was a blast to cover.

From his first entrance onto the national stage in 1992, as the human face of the novel computer virus known as Michelangelo, he generated all the excitement and flimflam of the Music Man. Never mind that the Michelangelo Virus turned out to be a hypefest—McAfee was able to capitalize on it big time. The worldwide hysteria he provoked helped him launch an antivirus software company that, when he sold it a scant few years later, made him $100 million.

The whispers around McAfee in those early days—never proven, of course—were that he worked with labs to create some of those viruses.  That was probably industry jealousy: his software was the very first to catch whatever new, obscure computer bug found its way onto a personal computer.

"People kept saying I hyped this, I hyped this," McAfee complained to me in 1992, shortly after the Michelangelo Virus turned out to be fake news. "I never contacted the press—they called me."

"This is John David McAfee, the man who once ran a service that revolved around the curious premise that, if you paid him a membership fee and tested HIV-negative, you could have AIDS-free sex with other members for six months.  This is the man who jumped from biological viruses to computer viruses and quickly became a flamboyant expert on the new demi-plague, showing up at the scene of infected PCs in his Winnebago 'antivirus paramedic unit.' "—From a 1992 Newsday story

McAfee thrived in the lawless, wild west of early technology (and anywhere else he could find a wild west.) Crypto—right here in River City!—with its ready market of credulous marks, fellow shillers, and contempt for the law was at once a perfect place for him to prospect, as well as his ultimate undoing.

And we in the press? He never contacted us. We called him.

McAfee made the best, most colorful copy. He claimed to have been arrested 21 times for tax evasion, SEC violations, drugs and other stuff. He was a suspect in a murder in Belize, though he was never charged, which, I suppose, only added to his outlaw mystique.

A McAfee story was always good for traffic, especially during the dark days of crypto winter. And we never needed to contact him—he lived in social media, especially Twitter, where he fed us and his million followers a daily diary’s worth of updates on his never-ending antics.

In a 2018 profile, New York Magazine dubbed him the spokesman for crypto.

Whale fucking. No joke. Each year, on Feb 1st, in the Molokai Channel, a few men compete in the world's only whale fucking contest. Humpback whales are easy to fuck- for a second or less. World record: 31 seconds. I competed once. Almost got my ribs crushed. Stick with Ostriches.

He famously claimed to have fucked a whale. And an ostrich. (He later backtracked on the whale; and the ostrich isn’t talking.) He bet that Bitcoin would be worth a million dollars by the end of 2020 or he’d eat his own dick. (He later clarified that a squadron of high-class escorts would be doing the presumptive dick-eating on his behalf.) For a while, he produced a series of videos offering recipes of vomitous cocktails he’d concoct.

He ran for president. He ran away from the law. He seemed to carry an arsenal’s worth of guns on his yacht, and claimed that the CIA was after him. He is said, too, to have experimented with “quantum suicide”—a sort of one man’s Russian roulette, with a bit of Schrödinger’s cat in the mix—and survived.

After he was arrested for tax evasion last year, he continued to make news via periodic “tweets from jail.” Shortly after his imprisonment in Spain in October, presaging today’s reported suicide, he had an accomplice tweet that reports of his demise were greatly exaggerated. McAfee said: “Know that if I hang myself, a la Epstein, it will be no fault of mine.”

Even on his way to death, he couldn't help but rabble rouse.

But curiously, his last tweet, which came a week ago, and is pinned to his account, was absent his usual bluster. McAfee sounded defeated.

The US believes I have hidden crypto. I wish I did but it has dissolved through the many hands of Team McAfee (your belief is not required), and my remaining assets are all seized. My friends evaporated through fear of association.

Yet, I regret nothing.

Then again, if rumors crop up that John David McAfee was just seen in Tahiti or New Guinea or a dive bar in Key West, surrounded by a cadre of lunatics and drinking a cocktail made with real gunpowder, would anyone be surprised? Nah. Without the myth of outlaws, there'd be no wild west. And without the wild west, where would the rest of us be?