How Emily Segal Crowdfunded Her New Novel with Crypto 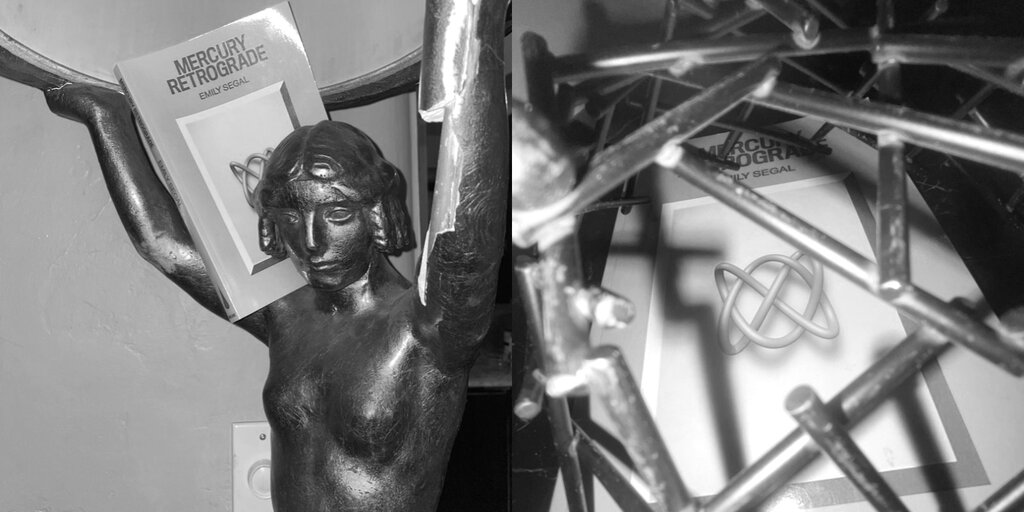 In 2011, a business-oriented artist collective called K-HOLE released a trend forecasting report—a sort of parody of brands trying to anticipate the next big thing.

Titled “FRAGMORETATION: A REPORT ON VISIBILITY,” the report was a high-minded meditation on consumerism, with riffs on fashion, drug culture, and unconventional sex toys. The report was the first in what would become a series of five; most famously, it’s credited with coining the term “normcore,” which ended up codifying a minimalist fashion movement.

K-HOLE, which disbanded in 2016, was also a launchpad for one of its members: the writer Emily Segal.

She’s since turned her particular brand of au courant cheekiness into a career that bridges art and strategy: she co-founded a consultancy called Nemesis in 2017, and started her own press, Deluge Books, geared towards experimental writing from a queer perspective. Her first novel, Mercury Retrograde, was released via Deluge last year. 2017 was also when Segal began hearing about cryptocurrency. “I was depressed by it,” she told Decrypt. “I don't personally have a massive interest in finance, and if I'm stressed out about money—which at the time I certainly was, because I was starting a business and writing a novel and in my 20s—for me, being obsessed with the minutiae around money is not what soothes my anxiety.”

It makes a certain amount of sense. People have heard of Bitcoin, at this point, but crypto is still very much an emerging technology. For the last decade, it’s mostly been the domain of those on the fringe—privacy obsessives, utopian technologists, money launderers and passionate nerds, with an ethos that borders on evangelism. Finding herself in Berlin, among some early adopters coming into their first big crypto windfalls, Segal rolled her eyes.

But with the advent of the NFT craze this past winter, her attitude toward crypto changed. “All day every day, I'm thinking about how experimental writers, poets, queer people, and people who don't fit into the literary establishment or the artist establishment can create their work and get it funded and sustained and seen by the world,” she said. “So I got excited when I started learning about different things that people were doing [in the space].”

One of those projects was Mirror—a blockchain-based publishing platform in the vein of Substack or Medium. Like Substack, it has ties to the VC firm Andreessen Horowitz (former a16z partner Denis Nazarov is the driving force behind it) but its vision is significantly broader. John Palmer, a crypto-oriented product designer, was the first to crowdfund his writing on Mirror with a sale of equity that worked a little like an ICO (initial coin offering), the funding vehicle that’s helped burgeoning companies (and fraudsters) make millions over the past few years.

Palmer used his Mirror site to generate a fixed supply of ERC-20 tokens on the Ethereum blockchain, and called them $ESSAY. The idea was that when the funding goal was met, the essay would get published, and the owners would have a stake in something that would become more valuable down the line. Palmer retained 35% of the $ESSAY supply, but anyone with an Ethereum wallet could buy in. Once crowdfunded, the essay itself was minted as an NFT and sold through the online auction house Zora. Proceeds were funneled back into the $ESSAY contract, so the value of each investor’s $ESSAY stake grew in proportion to the total value of the contract.

Unlike Substack, which offers access to paywalled content through a traditional subscription model (usually a low fee), tokenized essays on Mirror ask high rollers to invest in writing with the expectation of returns; the funded content is available publicly, but stakeholders are forever tied to the smart contracts underpinning the work. It’s not hard to see why this is an appealing alternative to something like Substack—fractional ownership in a first edition NFT from a best-selling author could pay off in perpetuity, as the text is resold and accrues value over time.

Getting access to Mirror is its own hurdle. As with most things in crypto, the appeal is scarcity: it costs one $WRITE token to create a blog on the site, and the only way to get new tokens is to enter a weekly contest called “Write Race.” Each week, during a two-hour window, you can spend $WRITE tokens to cast votes for your favorite writers (1 vote costs .01 $WRITE). The ten accounts with the most votes get one $WRITE token, and can join the site. They also get significantly more voting power in subsequent weeks, which risks making the whole thing a kind of popularity contest. The people already on the platform (VCs, friends of the developers, people in the know) will always exert the greatest influence over who gets onto the platform. It’s a more extreme version of the question about whether or not Substack’s paying advances to certain writers amounts to an “editorial” decision; on Mirror, token holders are the gatekeepers.

After Palmer’s success with $ESSAY, Dena Yago, another former K-HOLE member, used Mirror to issue $MOOD tokens for an essay on Billie Eilish and affect theory.

Segal decided to do the same. After getting onto Mirror (thanks to her longtime friendship with Denis Nazarov and connections in what she called “the tech bro universe”), she started a crowdfunding campaign for her second novel, Burn Alpha, which she’s described as “Q Anon meets Umberto Eco meets Gossip Girl.” Naturally, the token was dubbed $NOVEL.

It met its goal of raising 25 ETH (over $50,000) within 24 hours, thanks in part to high-profile VC backers like Fred Wilson (Union Square Ventures) and Chris Dixon (Andreessen Horowitz). “Silicon Valley tends to love that type of thing,” said Segal.

But Silicon Valley doesn’t tend to love that type of thing; VCs aren’t typically eager to put money in traditional publishing, or in writing for its own sake. By smuggling her work into a buzzy crypto framework, Segal managed to extract real money from the Sand Hill Road crowd.

The irony isn’t lost on her.

“I shred Andreessen in my first book,” she noted. It’s true: in one chapter, she takes great pains to describe two Andreessen Horowitz “suits” with “Tibetan prayer beads coiled around their wrists”—a parody of a certain Bay Area archetype.

Segal sees crypto crowdfunding as a way to potentially shift the dynamics that have historically kept money out of the hands of smaller artists. “Right now, if you're a poet, then society is like, your work has a value of zero,” she explained. “But maybe a tiny sliver of you can become college professors, and thus survive. And that's a terrible deal. It's particular to our historical time and place, and it does not need to be that way.”

It remains to be seen whether other artists can achieve what Segal accomplished with Mirror. Crypto investors like Fred Wilson have a stake in proving that this technology works, but it’s unlikely that they’ll swoop in to help every experimental poetry crowdfund. And the ecological repercussions of NFT transactions on the Ethereum blockchain aren’t exactly enticing, either. (Segal said she purchased carbon offsets—donations to organizations that reduce carbon emissions—in an attempt to compensate for the $NOVEL crowdfund’s climate impact.)

The hope is that people will feel it’s worth it to invest in quality work, regardless of whether or not they believe in blockchain tech. Segal and the other members of K-HOLE doubled down on crypto last week by auctioning off an NFT-backed diagram from its original “normcore” definition.

“People in the poetry world fight over crumbs,” Segal told me. “It means that incredible work goes unfunded. And I really would love to participate in changing that.”