Can Blockchain Safeguard the Rights of At-Risk LGBT People? 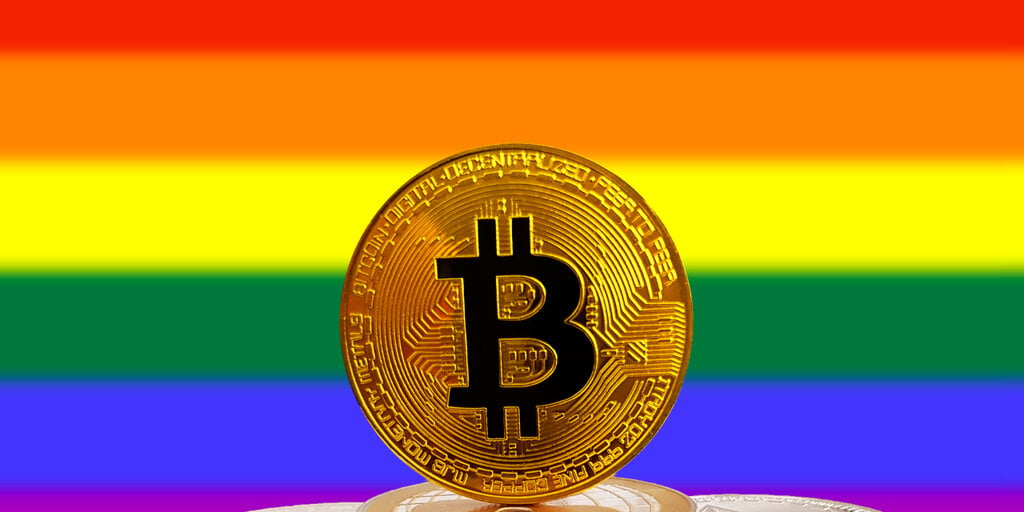 LGBT people have always found themselves at the cutting edge of technological innovation—often out of necessity. They pioneered navigating dial-up chat rooms in the 1990s and looking for hook-ups in the early days of Grindr; now, members of Iran’s LGBT community are using locally created private messaging apps using Telegram’s source code to evade danger. Research from the Internet Society finds that LGBT people are core users of the Internet, with 80% of LGBT people using a social networking site compared to 58% of the general public.

Yet online surveillance and censorship have cast a shadow over this marginalized community. The deployment of new technologies has emboldened anti-gay governments and non-state actors to crack down on the most vulnerable LGBT people across the world.

Efforts to create a facial recognition system that can identify homosexual people are picking up steam, while Iran's Cyber Police are threatening gay men with sodomy charges on dating apps. Perhaps most alarmingly, authorities in Chechnya are conducting entrapment programs via gay social networking apps, luring victims to be beaten, humiliated and, in some cases, murdered.

In a bid to safeguard hard-won civil liberties, activists, NGOs, and technology companies are increasingly looking to blockchain technologies as an effective way to provide tools for sexual minorities to defend themselves against repressive governments and gain equal rights.

In Asia, Taiwan is currently the only country that has legalized same-sex marriage. While several other countries in the region offer some form of same-sex relationship recognition, the vast majority of Asian nations do not.

Since hearing about the challenges faced by the LGBT community in Japan five years ago at a conference on how society can be changed for the better, Koki Uchiyama has been looking for a workaround to provide same-sex couples in Japan with marriage benefits.

"Until that moment, I didn’t know about all the problems these people were facing," Uchiyama told Decrypt. "I was very, very shocked during the session—I started crying and just couldn’t stop."

After the session ended, Uchiyama spoke to his other panelists to find out more about how to support the community. Then, two years ago, Uchiyama had a eureka moment.

"I thought: what if I combine blockchain technology with support for the LGBT community," he said. The Tokyo-based Famiee Project was born soon after and began to issue blockchain-backed partnership certificates for same-sex couples in early 2021. To apply for a certificate, couples need to download the Famiee iPhone app, verify their personal details and sign a declaration.

More than 40 major Japanese corporations, including Japan Airlines and Panasonic Group, currently accept the certificates as proof of marital status, with many more firms lined up.

As a small non-profit, Famiee can’t guarantee it will be able to validate these certificates in the long-term. The secure, record-keeping benefits offered by blockchain made it the obvious choice for this project, according to Uchiyama.

"We decided to store this kind of data on blockchain to achieve our obligation of keeping the data available for the family and their next generations," he said. "Using blockchain means the data is not changed and the system works without some central owners."

From employer spousal benefits, including parental leave and life insurance, to getting permission from landlords to live together; the practical benefits couples gain from obtaining a recognized proof of marriage can have a material impact on the lives, and finances, of LGBT partners.

In early 2018, gay social network Hornet announced the launch of the LGBT Foundation, a not-for-profit organization tasked with harnessing the "power and potential of blockchain technology…for the global good of the lesbian, gay, bisexual, and transgender community."

The pitch by the LGBT Foundation was straightforward; conduct an Initial Coin Offering (ICO) of LGBT Token, a cryptocurrency designed to create a viable payment system, protect the identity of at-risk LGBT people and support nonprofits that support the community.

The LGBT Foundation is a not-for-profit organization with the mission to harness the power of blockchain technology to deliver equality for the global LGBT+ community. https://t.co/ypz2NIq087

Plans for the LGBT Token were ambitious and went far beyond just setting up a cryptocurrency. Near-term goals included everything from using the LGBT Token to buy at-risk gay users in Chechnya airplane tickets to escape the country, to directly funding African LGBT organizations without the money being blocked by anti-LGBT governments.

Despite almost three years of studies and significant investment, the LGBT Token project halted plans to launch an ICO due to legal concerns over know-your-customer (KYC) and anti money laundering (AML) rules around issuing, as well as finding that "managing crypto assets were at odds with running a community purely based on pseudonymity," Christof Wittig, founder and CEO of Hornet and the LGBT Foundation, told Decrypt.

The LGBT Foundation may not have lived up to its lofty mission of making the LGBT Token a "method of payment in everyday transactions for businesses", but the project did succeed in establishing several clear cases of how blockchain technology can be deployed in the real world to increase protections for at-risk LGBT people.

Access to reliable and affordable HIV tests in many sub-Saharan African and Asian countries is poor, particularly in rural areas lacking in healthcare infrastructure and Southern African nations. A toxic combination of anti-LGBT laws and stigma of HIV-positive people account for countless unnecessary deaths among men who have sex with men (MSM).

By using cryptocurrencies and blockchain’s distributed ledger technology to address these challenges, robust HIV tests can be sold, using a cryptocurrency, at the same time as ensuring privacy for the buyer—which is exactly what the LGBT Token proved.

The @lgbt_token is live! Find out more about the LGBT Wallet and how you can become a Hornet beta tester today. https://t.co/S1c1eZc2dT

Available on the Hornet app to users around the world, HIV self-tests were put up for purchase using the LGBT Token. Instead of visiting a hard-to-reach healthcare center and risking outing, self-tests give the user agency to find out their status within minutes.

Event ticket purchases via the Hornet app could also be made using the LGBT Token. Users of the Hornet app would find verified events, choose what personal data to share with the venue to purchase a digital ticket, and gain access to events with a QR code, all while keeping their identity protected.

The underlying concept and philosophy of utilizing modern cryptography for projects is not new. As far back as 1993, gay activist Tom Jennings, who created the FIDOnet matrix of computer bulletin boards, told WIRED magazine that cryptography has the potential to be a powerful force in protecting the privacy of targeted individuals.

People who never have had cops stomping through their house don't care about this…if we flood the world with these tools, that's going to make a big difference," he told the magazine 28 years ago.

Establishing parallel societal and financial systems was at the heart of the crypto-anarchist movements of the late 80s, too. While the interest in cryptocurrencies and blockchain technologies from financial conglomerates and international firms is helping to push these tools into the mainstream, a robust community of privacy advocates is keeping these ideals alive and provide a framework for LGBT blockchain activists.

How Bitcoin points to the future of decentralized protest

Take the example of Prague’s Parallel Polis. This crypto-anarchy hub is inspired by the teachings of renowned Czech dissident Vaclav Benda and pushes for a parallel financial ecosystem that spurns government interference.

Fabrice Houdart, board member of OutRight Action International, a global LGBT human rights organization, echos the tenets of Parallel Polis when talking about the power of decentralization.

"If we are not represented in society and we cannot make it work for us, an alternative is to create our own economy and our own currency," said Houdart.

"If we are not represented in society and we cannot make it work for us, an alternative is to create our own economy and our own currency."

During Houdart’s time as senior country officer at the World Bank, he found it extremely difficult to gain any funding for LGBT-related initiatives, particularly for projects in developing nations. Yet it’s exactly these grassroots movements of sexual minorities that have the least access to resources.

"We see LGBT organizations all over the place, whether it's in Russia or Botswana, struggling financially because, frankly, it's almost impossible for them to get more than a few pennies in grants," Houdart explained.

A number of governments also explicitly forbid certain types of local human rights organizations to receive money from abroad, including Russia. Houdart believes it’s odd that wealthy members of the LGBT community have not invested more money into issues abroad, which he partly attributes to the lack of an effective channel that has the capability to place money where it is needed most.

It’s hardly a surprise that the regulatory landscape for cryptocurrencies and blockchain is extremely complex and ever-shifting. Much has changed for the better since the early days of blockchain, with some governments warming to crypto-assets—but a major conflict exists between retaining the privacy benefits of these technologies and meeting regulations.

The application of someone's name and ID [to blockchain transactions] is regulation-made and that definitely would harm any community that needs more anonymity," explains Joe DiPasquale, CEO of San Francisco-based BitBull Capital, the first cryptocurrency fund of hedge funds.

For DiPasquale, it’s clear that anonymity is vital for vulnerable LGBT communities. "It comes to mind because, of course, there are about 72 countries that criminalise being LGBT," adds DiPasquale, who also co-founded StartOut, a nonprofit that fosters LGBT entrepreneurship. "You can imagine a way to transfer money that didn't need to be approved by a centralized authority—such as your nation's state, which may outlaw being LGBT—to be important."

"You can imagine a way to transfer money that didn't need to be approved by a centralized authority—such as your nation's state, which may outlaw being LGBT—to be important."

DiPasquale recalls Ben Horowitz, co-founder of venture capital fund Andreessen Horowitz, comparing the development of blockchain to the iOS platform when it was launched. "You couldn’t even conceive of apps like Uber or whatever else being built on the iPhone platform at that time."

As momentum continues to build around blockchain and forms of crypto-assets, it’s hoped more efforts will be put towards seeking solutions to longstanding issues faced by at-risk LGBT populations.

"We're at the bleeding edge of this new platform—it’s almost hard to imagine what might be there in the future," said DiPasquale. "There are certainly a lot of inherent abilities the blockchain brings with it. It's up to people and organizations, like the LGBT Token and others, to build on what’s already been done and create real change for LGBT people."