Ubisoft Gets Behind a New Free-to-Play Crypto Game 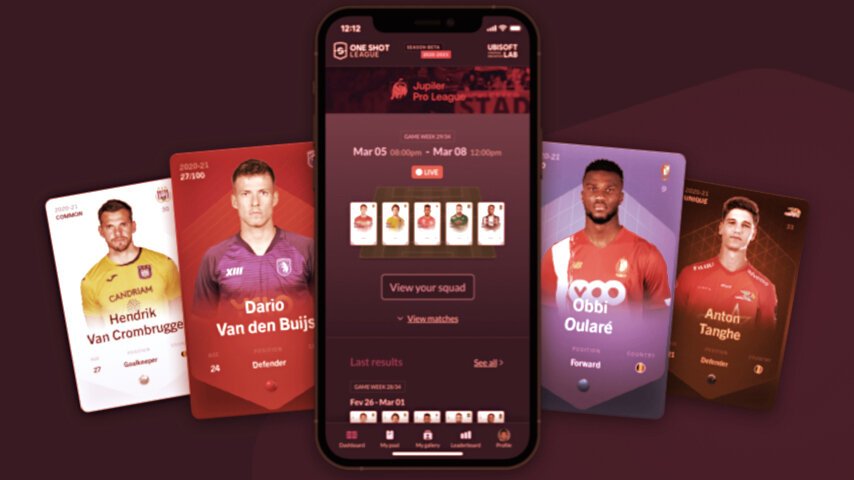 Ethereum-based fantasy soccer game Sorare finished February by announcing a $50 million Series A funding round, and has now started March with another major move: the launch of One Shot League, a free-to-play spinoff created in collaboration with gaming giant Ubisoft.

One Shot League, which is available to play starting today, serves as an on-ramp to the core Sorare experience, which counts more than 100 officially licensed teams and leagues from around the world. Players must use a Sorare account, and can bring in some of their premium digital Sorare cards—which are non-fungible tokens, or NFTs—from participating leagues to receive a special boost in One Shot League.

Like the core Sorare game, One Shot League is a fantasy soccer experience in which players use digital cards based on professional players. The game is launching initially with only the official Jupiler Pro League license out of Belgium, which has five match weeks left in the current season.

Players who sign up for One Shot League now will receive 25 free Sorare common cards and can use five cards per week, earning points from each pro’s respective real-life performance to scale the online leaderboards. Should players sign up following the next match week, they will receive only 20 cards for the four remaining weeks (or five cards per match week), and so on and so forth until the season ends. At the end of the season, the top players will earn prizes including rare Sorare cards.

Interestingly, One Shot League’s development was led by Ubisoft, the global publisher behind such best-selling game franchises as Assassin’s Creed, Just Dance, and Tom Clancy’s Rainbow Six. According to Sorare’s announcement today, “Ubisoft has been working these past few months” to develop the game.

Discover an all-new fantasy football experience with One Shot League!

One Shot League comes from Ubisoft’s Strategic Innovation Lab division, which leads the firm’s Entrepreneurs Lab program for supporting myriad startups, including many in the blockchain space. Sorare is just one of many crypto startups that have participated in the Entrepreneurs Lab initiative, along with other projects such as Splinterlands and Nine Chronicles developer Planetarium.

This isn’t the first crypto game experience that Ubisoft has published, but it is another big step for a company that is by far the most involved traditional game publisher in the crypto space. Last June, Ubisoft published Rabbids Token, a CryptoKitties-inspired collectibles game built to benefit UNICEF. Ubisoft had also previously teased a Minecraft-inspired crypto game prototype called HashCraft, but it was never released.

Ubisoft has its fingers in other crypto initiatives, as well, including supporting games such as Axie Infinity and the aforementioned Nine Chronicles, as well as serving as a validator for the EOS blockchain-driven digital gaming store, Ultra. Nicolas Pouard, Ubisoft’s Blockchain Initiative Director, spoke with Decrypt last year about the potential he sees in crypto gaming. On the advent of NFTs in gaming, Pouard said at the time that Ubisoft sees it “as a way to allow players to become stakeholders of the games they love, at an unprecedented level.”

Last week, Sorare announced that it raised a $50 million Series A round led by Benchmark, with participation from Accel as well as heavyweight investors such as Alexis Ohanian and Gary Vaynerchuk. Sorare had previously raised a $4 million seed round in July 2020. The French firm plans to use the funding to expand its team, bring on additional soccer leagues, and create a native Sorare mobile app.

Top Shot, in fact, pulled in a staggering $225 million in sales last month, according to a new report from DappRadar. That’s nearly as much as all NFT sales throughout the entire year in 2020.

Sorare likewise had a good month. According to Bloomberg, Sorare saw some $6.5 million worth of card sales in February, and its most valuable cards can command significant sums of money: a Sorare card based on Paris Saint-Germain forward Kylian Mbappé sold for approximately $65,000 in December.