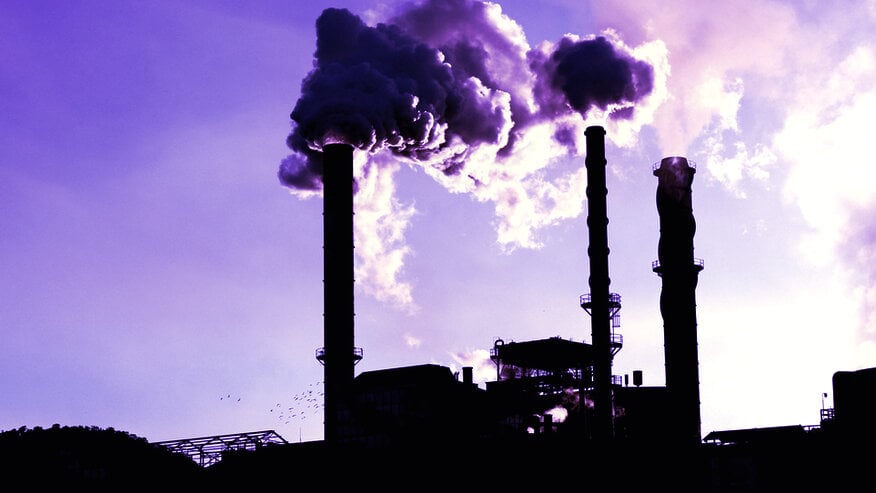 The world’s biggest banks have funded fossil fuel companies to the tune of $3.8 trillion since the 2015 Paris Agreement, according to a co-authored report published by the Rainforest Action Network.

“In the 5 years since the Paris Agreement, the world’s 60 biggest banks have financed fossil fuels to the tune of $3.8 trillion,” the report reads, adding, “Runaway funding for fossil fuel extraction and infrastructure fuels climate chaos and threatens the lives and livelihoods of millions.”

The fresh numbers are in: 60 banks, $3.8 trillion in fossil fuel financing since 2015. Big banks are making big climate talk without action to stop the #climatecrisis or the human rights violations fossil fuels inflict. Learn more at https://t.co/xxjj9wDTz3 pic.twitter.com/EEwFIlPkHI

Coming hot on JP Morgan's heels is Citi, which the report has awarded for catching up to the worst offender—JP Morgan. Since 2016, Citi has dedicated a total of $237 billion to fossil fuels, scoring 28.5 and 5 for coal and oil and gas respectively. Earlier this month, Citi released a report claiming Bitcoin may one day be the currency of choice for international trade.

The below graph details how the top ten worst offenders have financed fossil fuels in the five years since the Paris Agreement was signed. Banks including JP Morgan and Citi have been relatively consistent with their expenditure year on year, while others like Wells Fargo and RBC have seen relatively smaller expenditure in 2020, possibly owing to the COVID-19 pandemic burdening the wider fossil fuel industry.

Where exactly has the money gone?

We know which banks have financed the fossil fuel industry the most, but who exactly are the beneficiaries?

JP Morgan’s world-leading share of fossil fuel funding has gone to a plethora of companies, with energy infrastructure company TC Energy Corp taking the biggest share of JP Morgan money since 2016. In total, TC Energy Corp has received over $20 million from the banking giant. However, in 2020, Exxon Mobil Corp was the leading beneficiary of JP Morgan’s fossil fuel financing efforts.

Exxon Mobil has also received the most money from Citi ($14 million), the runner-up bank in the report, and from the worst-offending bank in Europe, Barclays ($11 million).

RBC—which the report slammed as the worst fracking bank in the world—has given the largest chunk of its funding for fossil fuels to Cenovus Energy Inc, an oil and natural gas company headquartered in Calgary.

Scotiabank, which the report awarded for having “really bad policies,” has given the largest share of its total $114 billion in financing to North American oil and gas company Crescent Point Energy Corp.

Why does this matter?

Many banks operate with restrictions to the amount of financing they provide for coal, oil and gas, but studies have shown that certain amounts of fossil fuels must remain unused to limit the impact of global warming.

Excessive funding for fossil fuel companies not only contributes to global warming, it threatens lives and communities—and the world’s biggest banks have been shown to be complicit.

For some, the report may demonstrate hypocrisy on the part of the world’s largest banks—most of which have promised to do their part to fight climate change in the past. Last year, JP Morgan pledged to align its lending with the Paris Agreement, but this report has the banking giant doing more than any other bank in the study when it comes to financing fossil fuels.

The report’s findings also come at a time when Bitcoin and other cryptocurrencies are facing increasing scrutiny over their energy consumption. Notably, Bank of America—one of the banks singled out in the Rainforest Action Network report—took aim at Bitcoin’s energy consumption earlier this month, in a report titled Bitcoin’s Dirty Little Secrets.

Investment Bank Citi: Bitcoin Is ‘At the Tipping Point’

“A $1 billion fresh inflow into Bitcoin may cause CO2 to rise by the equivalent of 1.2 million (combustion engine) cars,” the research note said, adding that much of Bitcoin mining’s hash power is concentrated in “coal-fired Xinjiang.” In an interview with Al Jazeera, report author Francisco Blanch, head of commodities and derivatives research at Bank of America, noted that, “what I’m concerned about is the pace of growth in the demand for energy.”

Many of the banks in this study are headquartered in North America, and specifically, the United States—like JP Morgan, which is based in New York.

President Biden has made climate change a priority. Not only did he move to reinstate the United States into the Paris Agreement as soon as he became President, but he has called for companies to disclose gas emissions in an effort to make the US reach a target of net-zero emissions by 2050.

If climate change regulations continue to tighten, many of the world’s largest banks may have to reconsider their financing practices.