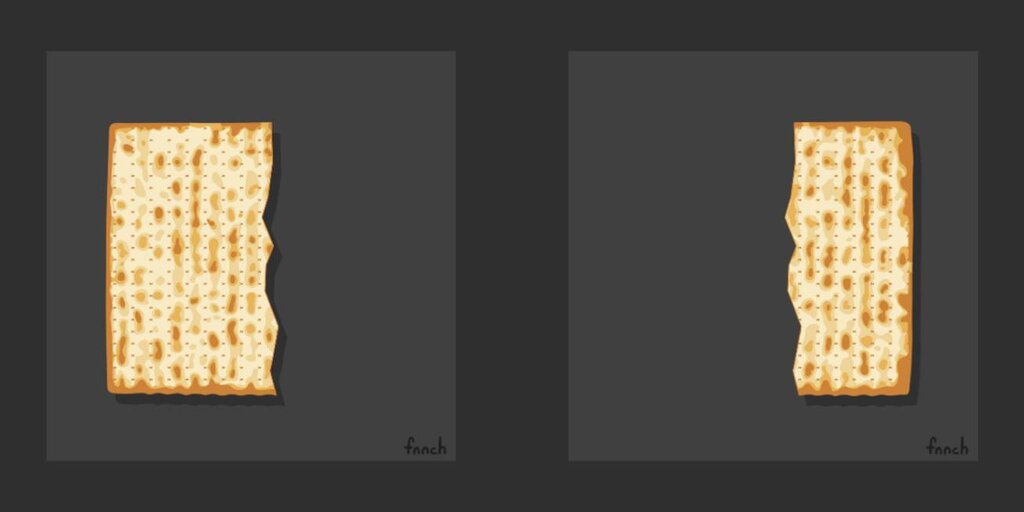 "I think without question we’re in an NFT bubble," says San Francisco street artist fnnch ("finch"), who last week sold an NFT artwork of Spotify CEO Daniel Ek, Facebook CEO Mark Zuckerberg, and Shopify CEO Tobi Lutke, all as honey-bottle bears, for $64,000. "I think about it like I think about the internet in 1999: you have something completely revolutionary, but also it’s a bubble, and those aren’t mutually exclusive."

On Sunday evening, fnnch will go the NFT route again when he auctions off an NFT artwork of an afikomen (a piece of matzo hidden in the house during Passover for kids to find) during a BuzzFeed-sponsored virtual seder hosted on Clubhouse at 7pm EST. The seder, called "Night of 1,000 Jewish Stars" and including some celebrity guests, will be co-broadcast online. Fnnch is using the NFT platform Foundation for the sale.

The afikomen NFT drawing has two halves: one to be auctioned off during the seder, with 100% of the proceeds benefiting the non-profit Value Culture; the other "hidden" inside the bio of one of the Clubhouse room's participants.

"It’s like a little bit of crypto history plus Jewish history," fnnch, who is Jewish, tells Decrypt. "We think it’s a milestone in Jewish culture. Well, maybe not a milestone, that sounds arrogant, but a moment."

Fnnch, a Stanford alum and computer programmer who became an artist full-time in 2016, has become known for his "honey bear" murals, and has done commissioned versions of the bears for brands. He "fell down the crypto rabbit hole in 2018," he says. "That’s when I heard about ERC-20 and I checked out Ethereum. I don’t issue any certificates of authenticity with any of my art—people have asked for it and I don’t do it, because it’s security theater, it’s a joke. The idea that this piece of paper verifies authenticity is laughable, and I’d rather have nothing than something that’s a joke. So I’ve always been looking for a different means to prove authenticity, and this is it."

NFTs or non-fungible tokens are crypto assets that represent a deed to any digital or physical collectible, like a trading card, painting, video clip, or album. Because they live on the blockchain, they are verifiably scarce, typically one of a very limited batch or even one of one, and are seen as virtual certificates of ownership—though recently there are some questions about whether every NFT marketplace is in fact storing NFTs on a blockchain.

Artists see in NFTs a way to get a larger cut of royalties from every resale. Musicians see a world of new potential for digital rights management (DRM). Sports leagues and pro athletes see a new way to connect directly with (and sell memorabilia directly to) their most devoted fans.

But now brands are rushing in. Taco Bell, Pringles, and Charmin have minted NFTs. Celebs are rushing in, like Monty Python's John Cleese. News outlets like TIME and the New York Times have rolled out NFTs, under the guise of trying out the tech.

Does all of that water down the space for real artists like fnnch?

He goes back to his comparison to the late '90s tech bubble. "Obviously we got both Amazon and Google" from that time, he reasons. "So for me, seeing Charmin or Taco Bell move into the space, that's fine, we’re still trying to figure out how these things are going to impact our lives."

Fnnch also thinks NFTs could bring more people into crypto—a more compelling use case than the "digital gold" argument for Bitcoin. "How many people do you know who have gold? I know more people who have Jordans that they collect, or baseball cards, or any collectibles," he says. "The idea that this is a digital baseball card, that’s not complicated."

Of course, there are complications that have prompted new controversy around NFTs. Many onlookers are concerned about the environmental impact of NFTs, most of which are built on the Ethereum blockchain, which has high energy usage. (Ethereum is in the process of moving from a Proof of Work to a Proof of Stake method, which should use much less energy.)

Fnnch says he anticipated the environmental objections, so he went ahead and purchased a carbon offset on Saturday, a certificate that shows investment in a renewable energy venture.

"This NFT is carbon neutral," he says. "But if you take this argument to its logical extreme, we should all kill ourselves. I mean, take a destination wedding, that is a carbon footprint nightmare."