Dapper Labs: Top Shot NFTs ‘Were a Risk’ for the NBA 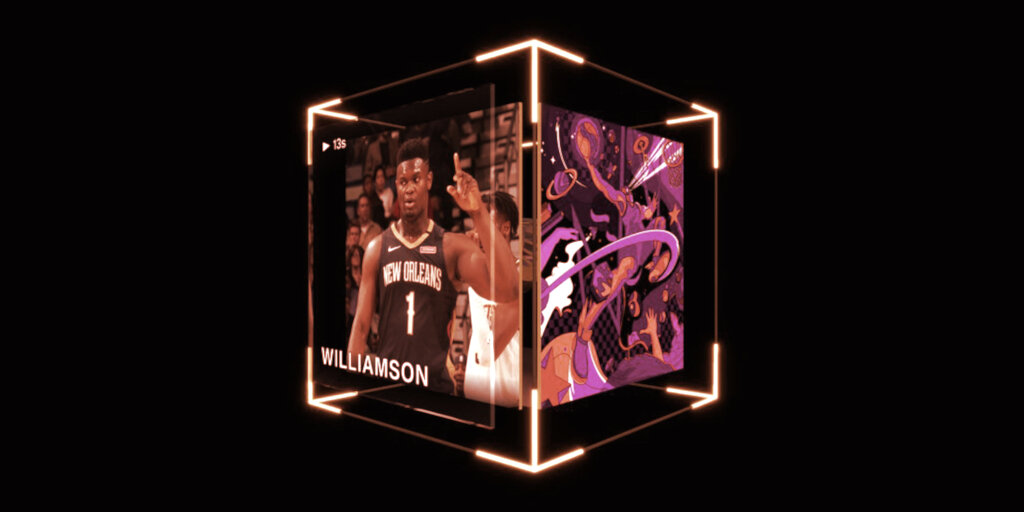 NBA Top Shot is a phenomenon, driving $436 million in trading volume since its launch last year (via DappRadar), with the vast majority of that coming since the start of 2021. With wide mainstream media coverage, some 800,000 users to date, and 2.8 million transactions on the Flow blockchain so far, it has helped lead the recent crypto artwork and collectibles non-fungible token (NFT) craze.

But back when the idea was first pitched to the league three years ago, who could’ve seen such rapid adoption and immense value around a digital collectibles experience? Caty Tedman, Dapper Labs’ Head of Marketing and Partnerships, spoke about their experience working with the basketball league during today's SportsTechie State of the Industry virtual conference, in a panel moderated by Decrypt.

Tedman, who previously worked for both the NFL and NHL, praised the NBA’s foresight. In a recent column, we explored why the digitally-minded NBA is perhaps the only sports league that could make something like Top Shot work in such a big way.

However, Tedman added that discussions also came after Dapper’s seminal NFT experience CryptoKitties clogged the Ethereum blockchain back in 2017. CryptoKitties popularized the idea that NFTs, which represent digital objects such as artwork, animated gifs, videos, or collectible cards, could be valuable, but the sudden surge in demand nearly shut down Ethereum in the process. Blockchain technology wasn’t ready for NFTs at scale.

“The NBA really blazed a trail in a lot of ways, and they’re willing to take some risks. Frankly, we were a risk three years ago when we started talking to them,” said Tedman. “We were CryptoKitties; the technology had already been proven to be problematic. Ethereum melted when we launched CryptoKitties, and they still said: ‘This is interesting and we’re willing to take this call and talk about it.’ That speaks to how far out they’re thinking about it.”

Even so, Tedman believes that other sports leagues could succeed with an NFT-centric experience like NBA Top Shot, but it can’t just be a matter of dropping baseball or football players into an otherwise identical platform and assuming it will make bank. In her view, such platforms must be custom-built according to community and fan expectations.

“If you think about the NFL, they don’t always do it first—but they try to do it best. Learning from the NBA is very much in their playbook,” she said. “When we think about the kind of products that we would build with other partners, we think about customizing it for those fan bases. We can’t just slap NFL players on NBA Top Shot and make it work.”

“I think the NFL could be incredibly successful [with NFTs],” Tedman added.

As Tedman discussed with Decrypt earlier this month, Dapper Labs’ focus right now is on improving platform stability. The surge of new users and marketplace activity has led to downtime plus restrictions on both registrations and transactions, plus Dapper has had to contend with a rush of bots trying to snap up valuable packs of NBA “moments” sold as NFTs. Each moment is an individually numbered, blockchain-authenticated video clip, and some are incredibly valuable: a single LeBron James moment sold for $208,000 in February.

ALL HAIL THE KING

@YoDough scooped up this Legendary LeBron James Moment from our Cosmic Series 1 set for $208,000

This Moment is from our first Legendary set ever minted

The top acquisition for any NBA Top Shot Moment ... so far.

Congrats on the nice pickup!

During the panel, Tedman affirmed that Dapper is working with the women’s WNBA league to bring them into Top Shot or a Top Shot-like experience. However, they’re still sorting through the process of what that will look like, and want to implement further stability measures before expanding the focus of the platform. Tedman even joked that she wants Dapper to finalize its ethics policy for employees participating in Top Shot before the WNBA is added.

“We’re working through some stuff with the [WNBA] right now, but it’s the 25th-anniversary season and we’re super excited about what that can look like in Top Shot or a Top Shot environment,” said Tedman. “There’s super spectacular talent on that side. I’m like: ‘Can we get our play policy worked out? Because I don’t even want to do a [WNBA] drop until we get that worked out.’”