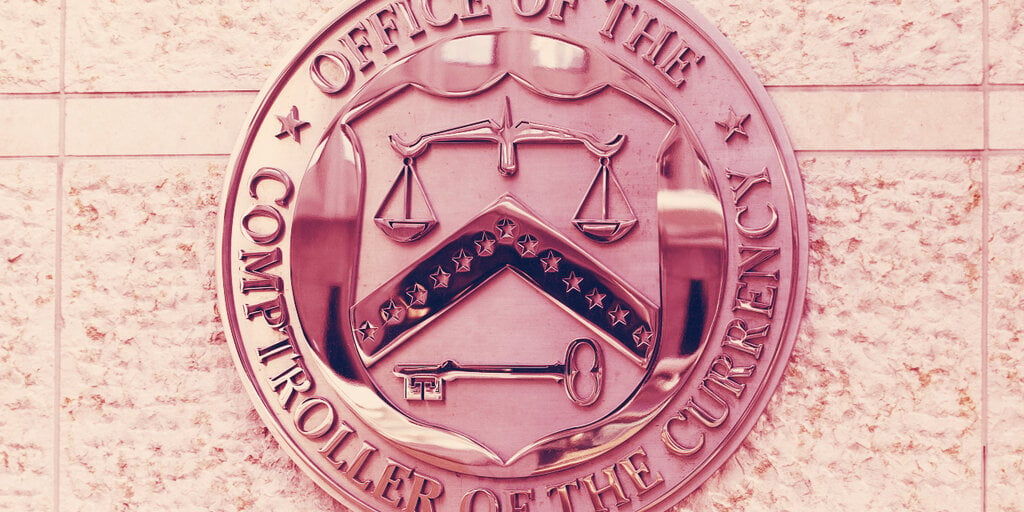 The Office of the Comptroller of the Currency (OCC) is one of the less glamorous federal agencies.

But the office, which oversees the country's biggest banks, has gained new prominence in recent years due to questions over how to integrate fintech and cryptocurrency firms into the banking system. Now there's a quiet fight over who should lead it.

Until a week ago, it looked like Michael Barr, an Obama-era Treasury official, was a lock to be named as the Biden Administration's pick to head the OCC.

Such a move was hailed by many in the cryptocurrency industry, who believed his background—including a stint advising crypto payments firm Ripple—would mean Barr would continue the crypto-friendly policies of former OCC head, Brian Brooks. Others, though, complained that Barr appeared to be too cozy with the fintech industry:

A disturbing number of people high-fiving the Michael Barr OCC choice are in fintech pic.twitter.com/hQYqXxlg1r

Now, hopes for Barr's confirmation have been dashed.

In the last week, Bloomberg reported that the Biden White House has "all but ruled out" naming Barr. Meanwhile, American Banker suggested Barr's appointment had been torpedoed by Biden's progressives allies who have been frustrated with the President's failure to name one of their own to a top Cabinet slot. The publication added that the new favorite to lead the OCC is Mehrsa Baradaran, an academic "outsider" who has made her name publishing books and articles about racial injustice in the US banking system.

The appointment of Baradaran, who would be the first woman of color to lead the OCC, would be a victory for progressives. But it could also trigger anxiety and uncertainty in the crypto sector.

According to one Washington insider, who spoke to Decrypt on condition of anonymity, Baradaran would be an unpopular choice in crypto circles, in part because she has spoken skeptically about Bitcoin in the past.

In testimony to Congress in mid-2019, for instance, Baradaran likened Bitcoin to tulips, South Sea stocks, and other bubble-prone assets. She also observed that many Bitcoin boosters are philosophically opposed to regulation, citing an academic paper that described the politics of Bitcoin as "right-wing extremism."

"While I share many of the cryptocurrency industry’s concerns with respect to failures of the banking industry, I do not believe cryptocurrency is the best solution to the problems of financial inclusion and equity in banking," said Baradaran before the Senate Committee on Banking, Housing and Community Affairs.

Baradaran did not respond to a request for comment about those remarks, including whether her view on crypto is the same as the one she shared nearly two years ago.

The Fintech Trade Association (FTA), a newly formed industry group, declined to comment specifically on the Baradaran rumors, but did say it will work with the OCC in hopes of finding a balance between consumer protection and innovation.

"With millions underbanked or underserved, we look forward to engaging with OCC leadership to take a proactive approach, and develop a coherent, forward-looking framework that ensures consumer protections, while driving innovations that will ultimately deliver access to safe, inclusive, low-cost, and equitable products and services," said Milan Dalal, Senior Government Relations Advisor for the FTA.

If Baradaran is indeed picked to lead the OCC, the appointment would not necessarily be bad for crypto. Her first priorities would likely involve expanding access to the financial system, and guarding against systemic racism in banking and lending services—priorities that would likely lead her to focus on traditional banks rather than the crypto sector.

Meanwhile, the OCC's prominent initiatives during Brooks' tenure—which some lawmakers criticized as too focused on crypto—included issuing interpretive letters, including one clearing the way for banks to use stablecoins in their operations. Under Brooks, the OCC also granted a first-of-its-kind conditional trust charter to the crypto custody service, Anchorage—effectively blessing it as a federal back. While Baradaran may be unlikely to embrace similar initiatives, the Washington source predicted she would be unlikely to roll back Brooks' initiatives.

The source also expressed hope that the Biden Administration would select a different dark horse to lead the OCC in the form of California state regulator, Manny Alvarez—a a name also floated as a possible pick in the American Banker piece.

While Politico reported last Monday that the Administration was "close" to naming Baradaran, the precise timeline for an OCC appointment is unclear, meaning it may be weeks before a formal announcement. The OCC role is less high profile than the heads of other agencies, which has typically made it a lower priority for incoming Presidents.