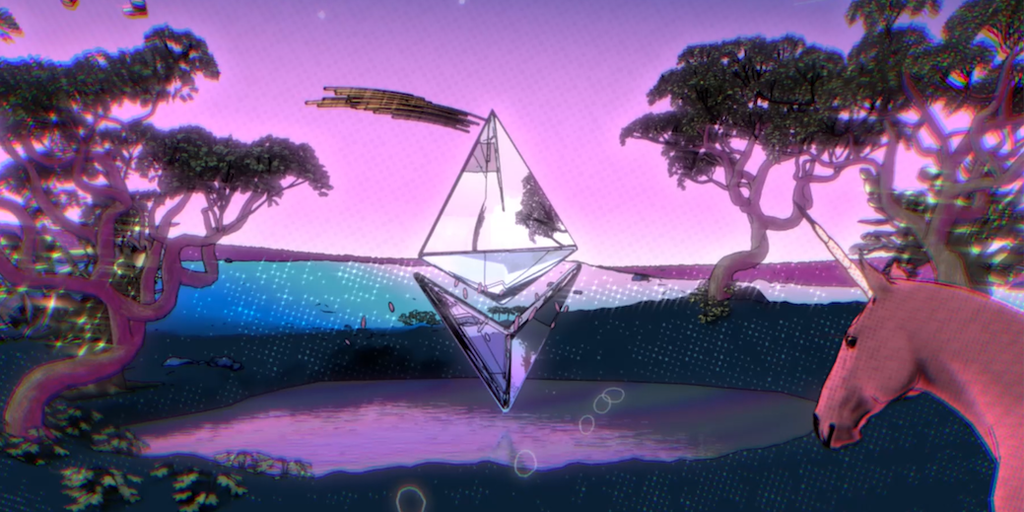 A digital artist called pplpleasr is making waves through promo videos that explain decentralized finance protocols through rich symbolism. Her latest video, in which decentralized exchange Uniswap’s latest algorithm brings an arid desert to life, just sold for $525k (310 ETH) as an NFT.

In the opening scenes of the video, the Uniswap unicorn—the dApp’s mascot—roams a rocky plateau, looking glum and hating everything, its magical powers wholly spent. Suddenly Uniswap’s newly-updated algorithm, the one that powers the next version of its decentralized exchange, sprouts from the rocks and shoots forward, leaving in its wake a thick canopy of trees and lights.

Then the algorithm, by now visible from space, leads the unicorn, by now striding and ablaze with the algorithm’s magical crypto swapping powers, to an oasis that represents Ethereum—the spring of eternal life, perhaps?

It’s punchy and to-the-point—and crucially could entice people into the insanely complicated niche of decentralized finance, where each protocol functions as its own puzzle box. Since it went live on Monday, the Uniswap ad (which, remember, promotes an algorithm) has attracted 650,000 views on Twitter.

Pplpleasr describes herself as a “high-quality meme generator”. Other DeFi projects received the same treatment, including Pickle Finance, Harvest Finance, Yearn Finance and SushiSwap, and have been widely shared on Twitter and Telegram.

have you seen the latest @picklefinance video yet?

To achieve all of this, pplpleasr leans on her background as a graphic designer—she’s worked on the Batman v Superman and Wonder Woman movies, and modeled in-game cinematics for Blizzard’s Diablo IV.

The ETH raised from the sale will go to charities that champion minority representation—a decision prompted by the Atlanta spa shootings on March 16 and the ensuing #StandWithAsians movement.

Behind the scenes of the sale

The Uniswap NFT is her highest NFT sale yet. She sold the ad, titled “x*y=k” after the bonding curve algorithm that powers Uniswap, in the form of an NFT—a cryptocurrency that links to the video and confers a vague form of digital ownership unto the buyer.

The buyer was a decentralized autonomous organization called PleasrDAO, a loosely-affiliated collective who pooled their money together to win the auction. The DAO (short for decentralized autonomous organization) is composed of super-fans grateful for her ability to craft high-quality animations for DeFi protocols that are far more inviting than big-budget ads for financial products from the likes of Goldman Sachs or JPMorgan.

an NFT SPAC, if you will

PleasrDAO comprises 23 Ethereum addresses that pooled funds together to place the winning bid. It was started by Leighton Cusack, fittingly the co-founder of DeFi firm, PoolTogether. Cusack told Decrypt he started the DAO because he couldn’t afford the piece by himself, but wanted to buy “this piece of history.”

Anyone want to create a quick DAO to bid on this??? https://t.co/mprnvVpWeh

“And so then the ball started moving in typical crypto-grassroots fashion with messages, flying around and getting different people involved,” Alex Svanevik, a data scientist based in Singapore and another member of the DAO, told Decrypt. The DAO became so large that the bidder whom the DAO had been formed to topple, Andrew Kang, gave up and joined PleasrDAO.

Svanevik lauds pplpleasr’s ability to “unify the otherwise competing factions of the DeFi ecosystem.” Svanevik, like most others, contributed the minimum: 10 ETH ($16,600). The largest contribution was 100 ETH, about $167,000.

Pplpleasr is a digital artist in her twenties, based in Taiwan. She fell into NFTs in the fall when a job at Apple fell through due to an ill-fated visa application. The bureaucratic misstep was a blessing in disguise, she told Decrypt. “DeFi gave me a home.”

She noticed a “lack of creative talent surrounding promotional or marketing material within the DeFi space,” she told Decrypt. “I also saw it as a way to make money—I mean, I didn't intend for it to turn into my actual job but, but it is now!”

She hopes her NFT auction will inspire other women and people of color to create digital art. Too many white males at the top of the list, she said. “It definitely took some courage to take that leap of faith, and I'm just really glad that it turned out really well.”

I’m actually crying. Moved beyond words, as I mentioned, I literally don’t deserve DeFi, the same community that supported my art from day one. The funds will not go to waste, I promise

“It's a good example of crypto being used for good”, Svanevik told Decrypt. “If she hadn’t done this, then that half a million dollars would not have been donated.”

The PleasrDAO has no expectations of having any say in where the money goes. “That's up to her,” Svanevik said. But pplpleasr said she’d happily consult her DAO patron.

And although PleasrDAO was initially formed for the sole purpose of buying up this NFT art, the group now has grand plans. PleasrDAO ended the sale with a spare $250,000 in its treasury.

“We noticed that this could be something bigger,” Svanevik told Decrypt. Cusack added that the DAO will continue to buy NFTs—and will even consider commissioning some art.