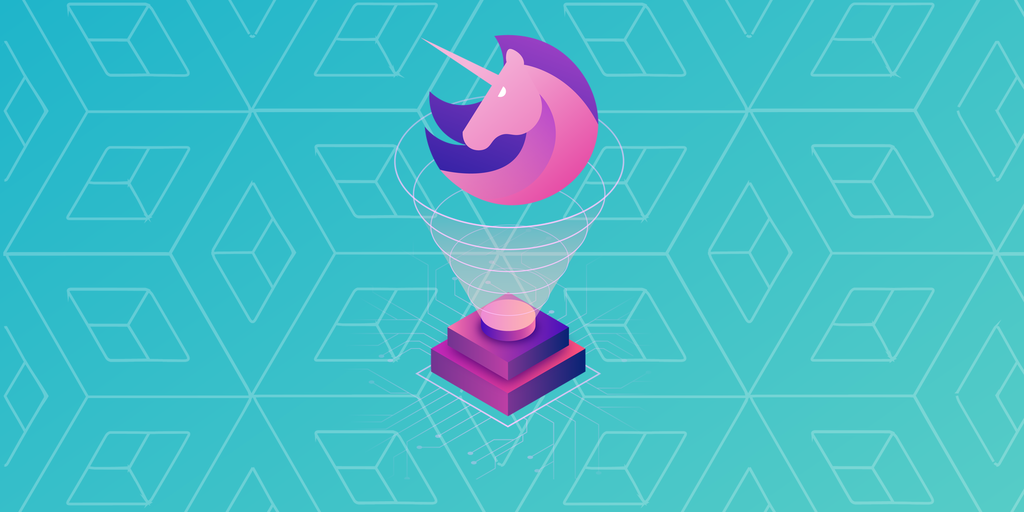 The burgeoning decentralized finance (DeFi) ecosystem aims to use decentralized, non-custodial financial products to replace centralized middlemen in financial applications such as loans, insurance and derivatives.

Uniswap is an example of one of the core products in the DeFi ecosystem, the decentralized crypto exchange, or DEX. DEXs aim to solve many of the problems of their centralized counterparts, including the risk of hacking, mismanagement, and arbitrary fees. However, decentralized exchanges have their own problems, mainly lack of liquidity—which means a lack of amount of money sloshing around an exchange that makes trading faster and more efficient.

Uniswap is trying to solve decentralized exchanges' liquidity problem, by allowing the exchange to swap tokens without relying on buyers and sellers creating that liquidity.

Below we explore how Uniswap works—and how it became one of the leading decentralized exchanges built on Ethereum.

Uniswap is a protocol on Ethereum for swapping ERC20 tokens. Unlike most exchanges, which are designed to take fees, Uniswap is designed to function as a public good—a tool for the community to trade tokens without platform fees or middlemen. Also unlike most exchanges, which match buyers and sellers to determine prices and execute trades, Uniswap uses a simple math equation and pools of tokens and ETH to do the same job.

Uniswap was created by Hayden Adams, who was inspired to create the protocol by a post made by Ethereum founder Vitalik Buterin.

What’s so special about Uniswap?

Uniswap’s main distinction from other decentralized exchanges is the use of a pricing mechanism called the “Constant Product Market Maker Model.”

Any token can be added to Uniswap by funding it with an equivalent value of ETH and the ERC20 token being traded. For example, if you wanted to make an exchange for an altcoin called Durian Token, you would launch a new Uniswap smart contract for Durian Token and create a liquidity pool with–for example–$10 worth of Durian Token and $10 worth of ETH.

Where Uniswap differs is that instead of connecting buyers and sellers to determine the price of Durian Token, Uniswap uses a constant equation:  x * y = k.

As a result, the price of tokens on Uniswap can only change if trades occur. Essentially what Uniswap is doing is balancing out the value of tokens, and the swapping of them based on how much people want to buy and sell them.

What else is different about Uniswap?

Absolutely any ERC20 token can be listed on Uniswap–no permission required. Each token has its own smart contract and liquidity pool–if one doesn’t exist, it can be created easily.

How are Uniswap tokens produced?

Whenever new ETH/ERC20 tokens are contributed to a Uniswap liquidity pool, the contributor receives a “pool token”, which is also an ERC20 token.

How to make your first trade on Uniswap

Through Uniswap, you’re able to purchase ether (ETH) and any of the thousands of ERC20 tokens supported by the platform.

To do this, you’re going to need some ETH in your balance to pay for any transaction fees, as well as something to trade for the ERC20 token you want. This might be ETH, or another ERC20 token. For example, if you’re looking to trade USD Coin (USDC) for UNI, you’re going to need to hold USDC in your wallet plus some ether to cover the transaction fee.

Here, we’ll cover how to make your first trade on Uniswap—by purchasing some UNI tokens with ETH.

Step 1: First head over to the Uniswap V2 exchange platform.

On the top right, click the ‘Connect to a wallet’ button, and log in with the wallet you wish to trade with. This can be either a MetaMask, WalletConnect, Coinbase Wallet, Fortmatic, or Portis Wallet.

For the purposes of this tutorial, we’ll log in with a MetaMask wallet.

Step 2: Once logged in, the trading interface will appear.

In our example, we’ll buy 0.1 ETH worth of UNI tokens. Step 4: At the bottom of the order menu, you’ll then see how much you can expect to receive.

If you’re happy with these figures, click the ‘Swap’ button.

Your wallet click will then prompt you to confirm the trade, and potentially adjust the fees to a number that works best for you. When you’re ready, confirm the transaction and it will then be processed. Once it’s done, your tokens will appear in your ERC20 wallet.

Once you've completed your first trade on Uniswap, there are plenty of options for more advanced users.

Since Uniswap is an open protocol of smart contracts, a number of different front-end user interfaces have already been created for it. For example, InstaDApp allows you to add funds into Uniswap pools without needing to access the official Uniswap user interface.

Interfaces such as Zapper.fi allow users to add funds to Uniswap pools using just ETH instead of ETH and another token. The interface even offers simple one-click solutions for purchasing pool tokens in combination with bZx token strategies.

With an array of official and unoffical resources for developers to build on the protocol, we should expect to see many more integrations between Uniswap’s unique token swapping system and new decentralized finance (DeFi) products in the coming years.

Uniswap V2 and beyond

Though Uniswap launched back in November 2018, it wasn't until relatively recently that the protocol began to see significant traction.

We are thrilled to announce Uniswap V2 has been deployed to the Ethereum mainet!!!

Read the Uniswap V2 launch blogpost for more information on the launch.https://t.co/CLPQok6KO4

Much of this interest is down to the release of Uniswap V2 in May 2020—a major upgrade that allows for direct ERC20 to ERC20 swaps, cutting Wrapped Ether (WETH) out of the equation where possible. Uniswap V2 also supports previously incompatible ERC20 tokens like OmiseGo (OMG) and Tether (USDt), and adds a host of technical improvements that make it more desirable to use.

As liquidity mining and yield farming platforms dramatically increased in popularity in 2020, Uniswap saw a corresponding surge in interest, since many DeFi platforms allow Uniswap liquidity providers to see an additional return on their LP tokens.

This, in combination with the 0.3% exchange fees distributed to liquidity providers—and the platform’s popularity as a launchpad for popular DeFi project tokens—has seen Uniswap rise the ranks to become one of the leading DeFi platforms by total value locked (TVL)—a measure of the total value of crypto assets locked up in the platform.

In September 2020, Uniswap launched UNI, the network’s governance token, airdropping 400 UNI tokens to every wallet address that had interacted with the Uniswap protocol before September 1.

From a distribution of 150 million UNI tokens, around 66 million were claimed in the first 24 hours following the airdrop. After distributing 40% of the tokens in the first year, it will taper down by 10 percentage points in each subsequent year, until all the tokens have been allocated.

Uniswap plans to distribute a capped total of 1 billion UNI over four years, with 60% earmarked for distribution to the community, 21.5% allocated to Uniswap employees, and the remaining 18.5% going to investors and advisors.

As a governance token, UNI entitles holders to a vote in how the protocol is run, affording them immediate ownership of Uniswap governance, the UNI community treasury, the protocol fee switch, eth ENS, the Uniswap Default List (tokens.uniswap.eth) and SOCKS liquidity tokens. The token was quickly listed on the Coinbase Pro exchange, and soon after on the main Coinbase exchange.

Uniswap’s token launch can be considered a response to the rise of SushiSwap, a clone of the protocol that added a token to encourage usage. In a more direct challenge, SushiSwap also tried to drain Uniswap of liquidity through a process called “vampire mining”.

In less than a year, Uniswap V2 has propelled the platform to meteoric growth.

Meanwhile, the Uniswap governance token (UNI) has climbed to become the 13th largest cryptocurrency by market capitalization after reaching a peak value of over $23. This was at least partially driven by the growing popularity of yield farming pools, many of which require users to hold UNI or Uniswap LP tokens.

The platform also found itself at the center of the recent Unisocks (SOCKS) craze, a token backed by a physical pair of socks. Although the first pair sold for just $12, in February 2021, a unique sale format that uses a bonding curve to set the price saw one pair sell for a whopping $92,000.

The day is finally here - Unisocks redemption is live!!!

Visit https://t.co/fJv6jrrVLd to redeem your $SOCKS for luxury socks shipped anywhere in the world.

But it hasn’t all been smooth sailing for Uniswap. As a result of massive congestion on the Ethereum network, transaction fees have shot through the roof—making trading on Uniswap an expensive task, particularly when concerning low-value trades.

This has seen the proliferation and growth of a huge range of alternative platforms, including TRON’s JustSwap, Qtum’s QiSwap, and Kyber Network—all of which promise faster transitions, lower fees, or both. Uniswap also recently saw its daily transaction volume briefly exceeded by PancakeSwap—a similar automated market maker (AMM) built on Binance Smart Chain.

But Uniswap isn't taking this threat lying down; Uniswap V3 is set to bring improved flexibility and lower fees, among other features.